Lucas Mungai January 20, 2018January 20, 2018 Motivation and Inspiration 2
I still have nostalgic memories of steam engine trains that would pass for what seemed like minutes on end near my home. At first, the train would pass twice or thrice a week. With time; however, it would only pass on Saturday mornings. At such times, I’d climb on a tree to watch and listen in awe and wonder, as first came the piercing horn (it was so loud that for a moment, I thought it’d have been put to better use as a wake-up call during The Resurrection, rather than just as a warning and alerting signal), then the bellowing smoke (it always amazed me how the train would produce such thick clouds of smoke without actually catching fire. I also wondered how such a mighty beast would give me quite a heavenly feeling, yet produce so much smoke you would think the chimneys of hell were faulty), then the rickety engines, and lastly, the rusty cabins would follow. I’d try counting the cabins but somewhere along the way I’d lose count, only to remain with pictures so vivid that when I closed my eyes, all I could see was the train, snaking it’s way across the beautiful ridges.

Deaf or blind, crazy or purely ignorant, no one ignored the passing of the train. Even at the railway crossing, all vehicles bowed to the passing train as servants would to their master, creating as it were, traffic jams that extended to the horizon.  But like a spectacular combat pilot on duty, His majesty trotted on to his destination with oblivion, like a pilgrim to Mecca. Like the commander-in-chief conducting a passing-out parade, never too fast, never too slow; he would put up a show that was not only ritualistic, but also meticulous and scripted at the same time, without ever risking being monotonous. Like a high dose of meth, He would leave us with enough memories to last us another week, by the end of which we would always lust for more. My grandma had warned me not to get too near the railway lines while the train was crossing, for she believed that the train had a magnet that would attract even flesh and blood. Out of the fear of 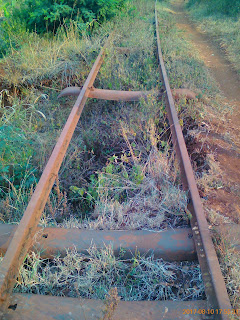 forever losing a chance to catch the breathtaking sight of the train if I somehow got too near the train’s “magnet” and got blown off my feet, I chose to obey grandma and just watch it from a distance. If only she knew how successful the train had been at blowing me off my feet even from afar!
Never tiring; never complaining, the weekly shows continued. Like a juggler at a circus who always has to deliver, He never disappointed. Eventually; however, the train stopped coming. The curtains had lastly closed in on Him. With His disappearance, it seems, went all my childhood dreams of a snaky adventure of traversing the countryside on a rickety diesel engine. Now, all that remains are old, rusty, dishevelled pieces of metal lying hopelessly on the ground, with very few sleepers in existence, wearing an almost despondent wish for the good old days.

Street Urchins are Human Too

2 thoughts on “My Childhood Memoirs”